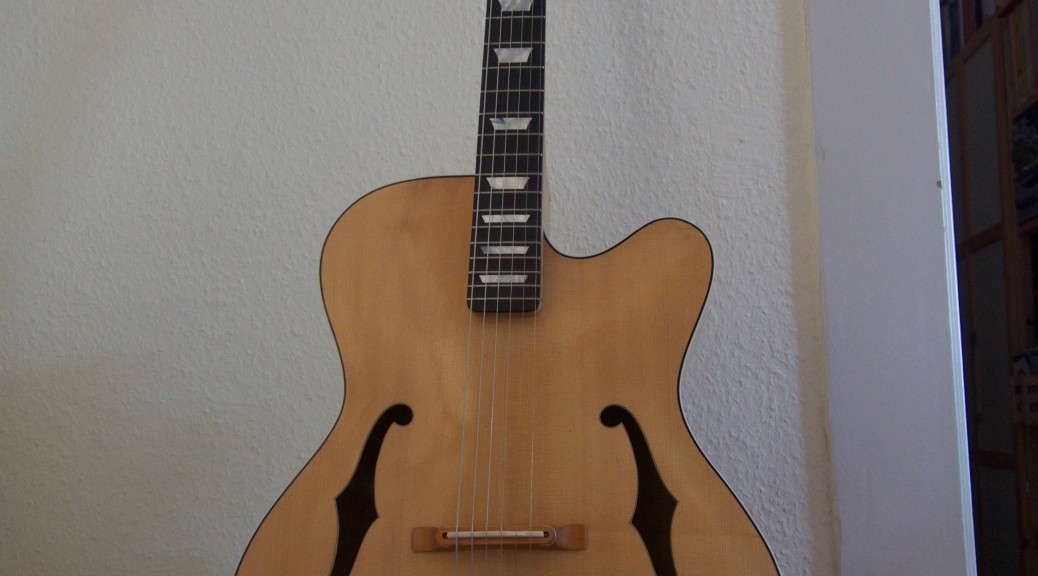 Some years ago a friend and colleague of mine offered me the membership in a special club: A workshop club with 80 members, equipped with professional tools for woodwork, metal work, bicycle repair shop, welding and more, accessible 24/7 days!

Although I’m not a friend of club life, I joined that workshop club directly.

At the same time I came across Roberto Benedetto’s book about making archtop guitars. I owned several guitars already but never owned a Jazz guitar – so, I decided to build one.

It was not the first guitar I built, as a teenager I followed some instruction found in a youth almanac to build an electric guitar. At the age of 14, with no money, I convinced my father to support me and I could finish it – even building a pick-up, using brass model railway tracks as frets and so on.

But! The body and neck was supposed to be made of simple core-board, which I followed, of course. What a crap! After setting up the guitar and playing some notes – which sounded quite OK, over an old tube radio – the neck started to bend. The action on the 12th fret was about 10mm and impossible to play. What a disappointment!

Today, after 45 years, I’m still mad about the author of this building instruction.

Nevertheless, 5 years ago, I tried it again and finally built a working archtop guitar, with some glitches, but it gave me the feeling of being  able to do more. This is how it began…